There Were Giants In The Earth in Those Days

Salvation. What Must You Do To Be Saved?

(Only Og king of Bashan was left of the remnant of the Rephaites. His bed was made of iron and was more than thirteen feet long and six feet wide. It is still in Rabbah of the Ammonites.)

Large Skulls at the Ica Museum in Mexico.
Click and drag photo to resize. 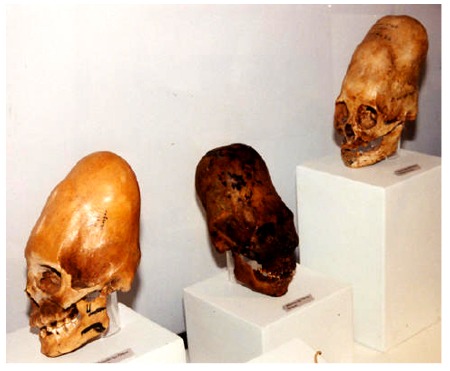 Mexico City, June 21---Giant human skeletons…measuring from 10 to 12 feet have been discovered by prospecting miners in a new gold and silver district in the mountains of the State of Chihuahua, according to members of the party who arrived here today.

The miners say they found a group of these skeletons intact in a hidden cave. The feet measured from 18 to 20 inches. (A male with a U.S shoe size of 13 has approximately a 12 inch foot). The government anthropology department plans to send a commission to investigate the discovery.

It is felt that the find may clear up the present doubtful origin of the Chihuahua Indians.

The discovery was made near the village of Sisoguichie. The skeletons were in a sitting position, the shoulders and arms bending forward and resting on the upraised knees. In this position they measured,from the top of the skull to the ground, from five to six feet.

A RACE OF GIANTS.

A Most Interesting Collection of Prehistoric Bones in America

J.B. Toomer has received a letter from Mr. Hazelton who is on a visit to Gartersville. The letter contained several heads made of bone and gave an interesting account of the opening of a large Indian mound near that town by a committee of scientists sent out from the Smithsonian Institution.

After removing the dirt for some distance a layer of large flagstones was found, which had evidently been dressed by hand and showed that the men who had quarried this rock understood their business.

These stones were removed when in a kind of vault beneath them the skeleton of a giant that measured 7 feet two inches was found.

His hair was course and jet black and hung to the waist, the brow being ornamented with a copper crown. The skeleton was remarkably well preserved and taken from the vault intact.

Near this skeleton were found the bodies of several children of various sizes. The remains of the latter were covered with beads made of bone of some kind. Upon removing the bodies were found to be enclosed in a network of straw or reeds and beneath this was a covering of skin of some animal.

In fact, the bodies had been prepared somewhat after the manner of mummies and will doubtless throw new light on the history of the people who reared these mounds.

Upon the stones that covered the vault were carved inscriptions, and if deciphered will probably lift the veil that has enshrouded the history of the race of giants that undoubtedly at one time inhabited this continent. 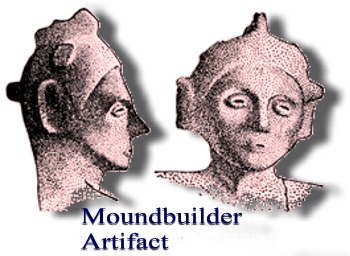 All the relics were carefully packed and forwarded to the Smithsonian Institution and are said to be the most interesting collection ever found in America. The explorers are now at work at another mound in Bartow country.

J. H. Hamley, a well known and reliable citizen of Barnard, Mo., writes to the Gazette, the particulars of the discovery of a GIANT skeleton, four miles southwest of that place.

A farmer named John W. Hannon, found the bones protruding from the bank of a ravine that has been cut by the action of the rains during the past years. Mr. Hannon worked several days in unearthing "the skeleton”, which proved to be that of a human being whose height was twelve feet.

The head through the temples was eleven inches; from the lower part of the skull at the back to the top was fifteen inches, and the circumference forty inches. The ribs were nearly four feet long, one and three-fourths inches wide. The thigh bones we're thirty-six inches long and large in proportion.

When the earth was removed the ribs stood high enough to enable a man to crawl in and explore the interior of the skeleton, turn around and come out with ease.

The first joint of the greater toe above the nail, was three inchen long, and the entire foot, eighteen inches in length. The skeleton lay on its face twenty feet below the surface of the ground and the toes were imbedded in the earth, indicating that the body either fell or was placed there when the ground was soft.

The left arm was passed around backward, the hand resting on the spinal column, while the right arm was stretched out to the front, and right. Some of the bones crumbled on exposure to the air, but many good specimens were pre- served, and are now exhibited at, Bernard Medical school.

The skeleton is generally pronounced a relic of the prehistoric race.

News was received here Monday from Mexico that at Ixtapalapa, a town 10 miles southeast of Mexico City , there had been discovered what was believed to be the skeleton of a prehistoric giant of extraordinary size.

A peon while excavating for the foundation of a house on the estate of Augustin Juarez found the skeleton of a human being that is estimated to have been about 15 feet high, and who must have lived ages ago, judging from the ossified state of the bones.

Romulo Luna, judge of the District , has taken possession of the skeleton which is complete with the exception of the skull.

Judge Luna says that as soon as the search for the skull is finished the skeleton will be forwarded to the national museum ,of Mexico, which has an almost priceless collection of Aztec antiquities.

The National museum, it is said , has made arrangements to investigate this “find”.

The discovery of the skeleton has revived the old Aztec legend that in a prehistoric age a race of giants lived valley of Anahuac, a name given by the aboriginal Mexicans to that part of the Mexican plateau nearly corresponding to the modern valley of Mexico City.

These giants, known as Quinatzins, the story goes, were afterwards destroyed by the Ulmecas, also of great stature , who in turn, perished by earthquake, interpreted as an expression of the wrath of God.