There Were Giants In The Earth in Those Days

Salvation. What Must You Do To Be Saved?

From Wikipedia, the free encyclopedia.

The main entrance to the temple proper, seen from the eastern end of the Naga causewayAngkor Wat (or Angkor Vat) is a temple at Angkor, Cambodia, built for king Suryavarman II in the early 12th century as his state temple and capital city.

The largest and best-preserved temple at the site, it is the only one to have remained a significant religious centre—first Hindu, then Buddhist—since its foundation.

The temple is the epitome of the high classical style of Khmer architecture. It has become a symbol of Cambodia, appearing on its national flag, and it is the country's prime attraction for visitors.

Angkor Wat combines two basic plans of Khmer temple architecture: the temple mountain and the later galleried temples. It is designed to represent Mount Meru, home of the "gods" in Hindu mythology: within a moat and an outer wall 3.6 km (2.2 miles) long are three rectangular galleries, each raised above the next.

At the centre of the temple stands a quincunx of towers. Unusually, Angkor Wat is orientated towards the west; scholars are divided as to the significance of this.

As well as for the grandeur and harmony of the architecture, the temple is admired for its extensive bas-reliefs and for the numerous devatas adorning its walls.

Angkor wat is in northwest Cambodia.The initial design and construction of the temple took place in the first half of the 12th century, during the reign of Suryavarman II (ruled 1113–c. 1150). Dedicated to Vishnu, it was built as the king's state temple and capital city.

As neither the foundation stela nor any contemporary inscriptions referring to the temple have been found, its original name is unknown.

It is located 5.5 km north of the modern town of Siem Reap, and a short distance south and slightly east of the previous capital, which was centred on the Baphuon. Work seems to have come to an end on the king's death, with some of the bas-reliefs unfinished.

In 1177 Angkor was sacked by the Chams, the traditional enemies of the Khmer. Thereafter the empire was restored by a new king, Jayavarman VII, who established a new capital and state temple (Angkor Thom and the Bayon respectively) which lie a few kilometres to the north.

STEGOSAURUS DEPICTED IN STONE: DID MAN AND DINOSAUR "CO-EXIST"?

"After wandering through the temple and marveling at the twisting fig trees for over an hour, I finally located the glyph I was searching for near the exit to the complex.

Before me, enclosed in a round circle, was a clear depiction of what could only be a stegosaurus.

The creature had a small neck and four short legs with a long tail. Along its humped back, a series of plates were clearly carved.

As I stared in a wonder, a guide leading two American tourists approached the spot and casually asked them if they believed dinosaurs lived 800 years ago? He then proudly showed them the stegosaurus carving to their utter amazement.

Stylistically similar circular carvings can be found all over Ta Prohm, but none of them show this same creature. While to my knowledge reputed sightings of a living stegosaurus have not been made, other saurians have been glimpsed.

In 1999, Papua New Guinea’s The Independent newspaper reported that a “dinosaur-like reptile” was witnessed near Lake Murray."

About the Stegosaurus; Extinct for 140 Million Years?

"Ta Prohm is a huge temple, and it's worth letting one of the very friendly guides show you around - the temple is a permanent state of near collapse too, so it's worth having someone who knows what they're doing lead you through the fallen masonry and heaped rubble.

Most importantly, they'll point out details you'll miss yourself, like the acoustics of the one of the towers in the courtyard - thump your chest standing inside it and it sounds as loud as a drum -

and also the small carving on one wall of what is unmistakeably a stegosaurus-like dinosaur. Quite where that came from I've yet to find out." "Stegosaurus means "roofed reptile." Its "roof" is made up of the large plates along the ridge of the animal's back.

What were they for? Originally, paleontologists speculated that the plates represented a type of armor, used for protection.

But the surfaces of the plates are crisscrossed with grooves for blood vessels, indicating that they were covered with skin when the animal was alive.

This led later paleontologists to speculate that the plates were used for controlling body temperature -- like solar collectors or heat radiators. While that is an interesting hypothesis, it cannot be tested scientifically, since all stegosaurs are extinct. This is one of the many cases in which scientists do not have conclusive answers Extinct dinosaurs present us with many such mysteries.

Stegosaurus offers more mysteries, such as how it could function with its tiny brain. The image of dinosaurs as massive beasts with walnut-sized brains is not true of many dinosaurs, but it is true of Stegosaurus.

It has even been suggested that Stegosaurus had a second brain to control its hindquarters, since the one in its head seems to be too small to manage the entire beast. But it was, and it did. Stegosaurus had only one, small brain.

Still another mystery involves Stegosaurus's front legs. As a baby fossil, the front legs are straight up and down. As an adult fossil, however, they are splayed out to the side. Which is correct? We're not sure, since they seem to fit both ways.

Only Stegosaurus, silent and still for 140 million years, contains the answers to these and the many other questions that surround it".....American Museum of Natural History

Just to stir the pot; is this another dino representation we ask sheepishly? (from the surrounding circle) 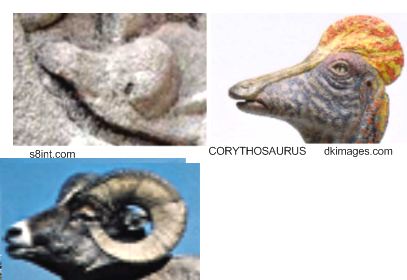